Diamond Credit Union and the Reading Royals Hockey Club teamed up to give nearly $3,000 to 12 charitable organizations during the 2018-2019 season. The donations were earned through the two long-time partners 5th annual Shoot for Commyounity contest.

At every Saturday Royals home game, on the ice between the second and third periods, a representative from each charitable organization took two shots at a target in goal with a chance to win up to $1,000. The first shot was from the near blue line, the second from the far blue line. Contestants won $250 for hitting the target and $1,000 for putting the puck through a hole in the center of it. Every charity won at least $100. 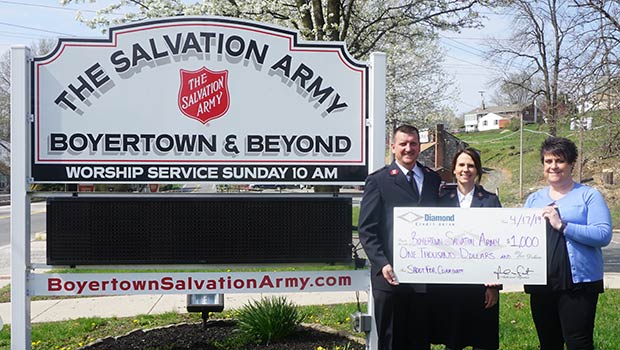 Taking the shot for The Salvation Army Boyertown on March 23 was Lt. Joseph Smith, Corps Officer.

He never shot a puck.

He never watched a game on TV in its entirety.

He was attending just his second Royals game.

He was thinking about remaining upright and not falling on the ice.

He took the shot.

Smith smoked his first shot through the hole in the target to win $1,000 for the Salvation Army. It was the lone $1,000 winner of the season.

Most people are familiar with the Salvation Army’s Bell Ringing program. This very recognizable campaign is held November through Christmas Eve each year. The programs supported by the funds raised however, go on all year.

“This came at a fantastic time,” Lt. Smith said. “After the Christmas push, funds start to dwindle down. We used this to stock our food pantry to provide our daily meal to the community for free.”

Teaming up with our local pro sports teams to better our neighborhoods…that’s younity.

<< Am I Saving Too Much Money in My Savings Account?
Outsourcing Business Finances Helps Small Business Grow >>